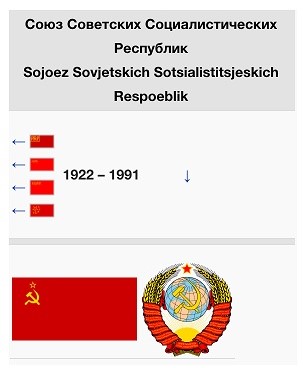 In 1991 the same year the Soviet Union was concluded, preliminary DEMMA started.  The founding was set up by Dr. Paul Mulkens during a Dutch Red Cross working visit and from provincial Russian side by Dr. Georgy Maltsin. For the founding details please go to page history. DEMMA is a non-profit organisation  maintaining on a longterm basis  exchange programmes between Dutch and Russian medical professionals. From Netherlands side the  province of  Drenthe (nearly half a million  inhabitants). From the Russian side the town Mytischy (a Moscow suburb with a population of 250.000 people). The objective  is to get and to improve a solid mutual understanding. And this -in close friendship- already has been occurred  already during 28 years through intensive exchange programmes in which until now nearly 200 people did participate.

For the exchange programmes initially the main venues were exclusively aimed at the central and regional  Mytischy hospital and in Drenthe at four hospitals (the Treant health care group Emmen-Hoogeveen-Stadskanaal and Assen). Later on the scope has been widened in Mytischy  with the participation of the  federal  Erismani Institute which health care  center has a lot of expertise in occupational health pathology and in ecological matters as well. DEMMA programmes are consequently shaped in a format of projects of a short time duration like working visits, Dwoyka or Troyka exchanges. To get an overview of all the reports since 2012 go to page reports. 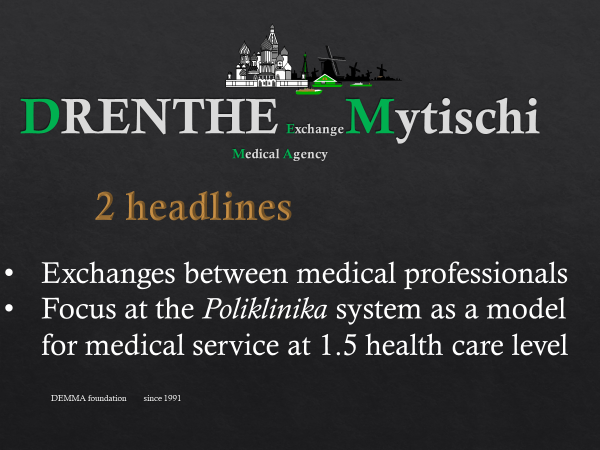 Implicit in the project was the promotion of education in the English language since this language was agreed as communication language. The organisation in Mytischy has been matured into an independent DEMMA-M(ytischy) counterpart group with chairman, secretary and other officers. A detailed list of active participants, in both Drenthe and in Mytischy as well, has been provided in the website pages:  organization,  annual reports and about Mytischy. In the Netherlands the DEMMA board is supported by the Recommendation Committee members. In this respect especially the support of the Dutch embassy in Moscow city has to be mentioned. For more information go to page  Recommendation Cte.

Overviewing all the activities we actually can distinguish two headlines. First of all the previous mentioned exchange programmes. However along these programmes since a couple of years full focus  has been turned up at an interesting Russian phenomenon: the Poliklinika  which was introduced in the thirties as a new health care system in the Sovjet Union.This is an in the Netherlands  unknown method of organization, providing health care in “1.5-level”  medical centers. This means medical services in between the first (general practitioner)  and the second level (hospital specialists). For the Dutch health care this might be very much worth to subject it to a profound study. Anyway this in Russia well functional system might be considered as very inspiring to a possible domestic use in the Netherlands.

As a constitution it applies also to DEMMA: the future is to the youth. So since 2012 incidentally also the young generation –medical students in their last stage-  has been involved. As has been planned by now for spring 2020: an eight weeks stage for one medical student from the Groningen University is in the picture.